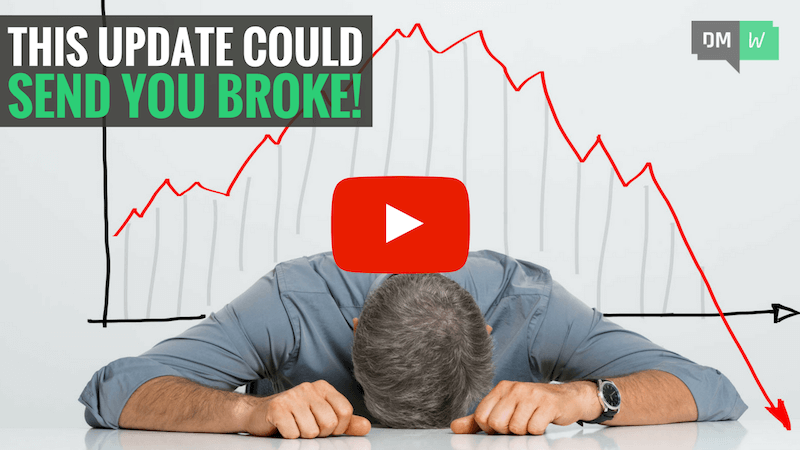 Before we dive into this week’s breaking news, we want to say a BIG thank you to all of our loyal DMW subscribers!

Issue #52 marks exactly one year since we started DMW...

In that time we’ve had over 15,000 people just like you subscribe and help us grow the DMW community.

So get this week's important news by watching the 6-minute video here right now.

In a report published last week, the UK’s Internet Advertising Bureau has revealed that advertisers have spent a staggering 924 MILLION dollars on videos ads in the first half of 2017.

For the first time in history, that’s more than what advertisers spent on traditional banner ads!

Part of the reason behind this is that the average time people spend watching online video per week has almost tripled over the last three years.

But in 2017 people are spending an average of 2 hours and 21 minutes per week!

Right now video is digital marketing’s most powerful format, and it’s only going to grow stronger.

If your business is solely advertising with traditional banner ads, it’s critical that you now pivot and start creating video ads.

Facebook Is Testing A Change To The News Feed That Could Send You Broke!

This week Facebook began testing a massive change that would see non-promoted posts relegated out of the News Feed.

Under the change, the News Feed only contains posts from friends and paid promoted posts.

For businesses that rely on organic social traffic, the implications of this could be catastrophic!

If Facebook rolls this out to all users, businesses would be forced to spend more money boosting ALL of their posts to get them in front of their audience.

The test is currently running across six countries including Slovakia, Serbia, and Sri Lanka.

We’ll keep you updated as this story progresses, so check in with DMW every week to stay informed!

In SEO news this week, Google has updated their Tag Manager system to have built-in scroll depth tracking.

If you’re not familiar with scroll depth tracking, it allows you to track how far your web visitors scroll down on a page.

This is useful because if content or calls to action fall below the fold of the page, they may not be seen at all!

The first step is to enable the new scroll depth tracking in your Google Tag Manager (GTM) account.

In case you don’t know, GTM is a system that allows you to quickly and easily update tracking code on your website without having to edit your site directly.

Simply update the tracking code in GTM, and it automatically updates your website.

This tracking code is used by Google Analytics to track and report your website’s traffic.

Once you’ve updated the tracking in GTM to track scroll depth, you’ll be able to see how far down your pages visitors are scrolling in Google Analytics.

For detailed steps on how to enable the scroll depth tracking, head to dmw.to/GTM

To finish this week’s DMW, we’re announcing the winners of the 2017 Noble Samurai Video Awards!

Thanks to everyone who participated. We had a fantastic time watching ALL of the incredible videos you guys entered.

After much deliberation, the three lucky winners are...

To see the winning videos, head to dmw.to/VA17

Congratulations to the three winners, we hope you enjoy your prizes!

If you missed out on the competition, and would still love some feedback about your video, post your videos to the I Use Content Samurai Facebook Group!

With over 921 members it's a great way to get useful, actionable feedback on your videos!