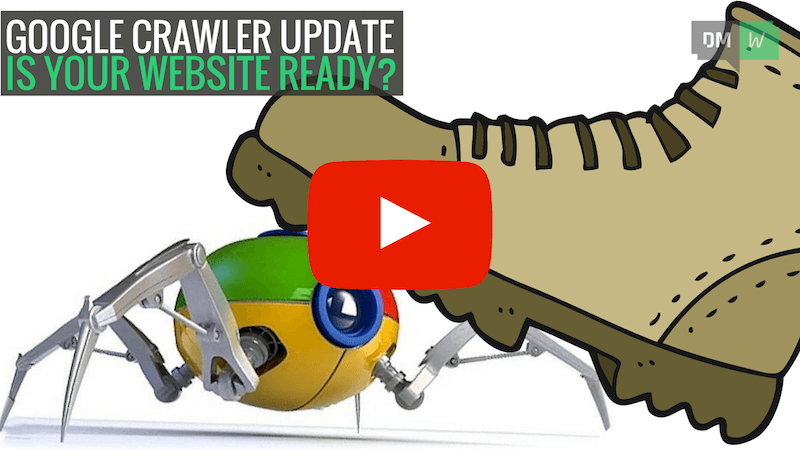 In breaking SEO news this week, Google has confirmed that it will no longer use the Ajax Crawling Scheme from 2018 onwards.

In case you don't know, Ajax is “the method of exchanging data with a server, and updating parts of a web page – without reloading the entire page.”

Google introduced the Ajax Crawling Scheme in 2009 as a way for its bots to crawl dynamically loading websites.

However, there is always a risk that your rankings could shift whenever Google changes their crawling algorithm.

To help you prepare for the death of the Ajax Crawling Scheme, Google has put together a list of recommendations…

Head to dmw.to/ajax to find out exactly how to best protect your Google rankings when the Ajax Crawling Scheme is switched off.

YouTube is hoping the new Reels format will allow creators to express themselves and engage fans without having to create a full-length video.

Here's what you need to know about Reels...

Reels are quick mobile videos that can be up to 30 seconds long.

You can add text, stickers, and filters to the Reels.

All of your Reels will upload to a new Reels tab on your channel.

Unlike 'Stories' on other platforms Reels don't expire, so over time, you can build up your Reels library.

YouTube hasn't yet confirmed how to join the beta, but they have stated that your YouTube channel must have at least 10,000 subscribers.

Snapchat Is Changing Its Algorithm To Separate Social From Media

This week Snapchat CEO Evan Spiegel declared they are are working on reviving their dwindling growth by getting users to spend more time using Snapchat.

To achieve this, Snapchat is "separating the social from the media" to give users more of what they watch the most.

Here's a summary of what the changes are...

The app will be broken down into three sections: left, middle, and right.

When you first open the app, the camera will be in the middle like it was previously.

Swipe left, and you'll get messages and Stories from friends, sorted by who you interact with the most.

Swipe right, and you'll now see content from social media stars and premium publishers, sorted by your past viewing behavior.

To help prevent 'fake news' that has plagued other platforms, content that appears to the right will also go through a human review system.

If your business is advertising on Snapchat, this change could lead to more people watching your ads, as they autoplay between organic Snapchat content…

So if you aren't already advertising on Snapchat, there’s never been a better time to start!

That’s a wrap on the last DMW for 2017. From everyone here at Noble Samurai, we’d like to wish you a safe and Happy Christmas and a fantastic New Year.

P.S. If you missed last week's issue, check it out here.

Great to have you on board!

You're now part of an exclusive community privy to cutting-edge insider news and insights on what's working in Digital Marketing TODAY!

What Can I Expect?

From now on every single week you'll receive insider tips, insights and knowledge from the industry's leading digital marketing experts delivered right to your email…

The best way to think of this video newsletter is like your own personal Samurai Sensei checking in with you periodically, bringing you critical knowledge you didn't know you needed, right when you need it most. A guide if you will, on your journey through the digital marketing landscape.

The next scheduled issue will hit your inbox in the coming days, but in the meantime check out our previous issues.